A Brief Introduction To Ayurveda – “The Science Of Life”

The science that deals with every aspect of “Ayuh” ( the span of life) is called Ayurveda. This is a definition of Ayurveda in its most concise form. However, the science of Ayurveda is an ocean of knowledge –A knowledge of life. It is not merely a physical or a medical science but an eternal science dealing with the origin and maintenance of life, death and so on.

However, Ayurveda in today’s life has gained importance in the field of prevention and cure of diseases and is gaining popularity worldwide for its effectiveness in the same.

Prevention of disease in the healthy and treatment of diseases in the disease is the main aim of Ayurveda. Ayurveda stresses not only on one’s physical well-being, but also on one’s mental/ emotional and spiritual well-being, which is now recognised by the world health organization and stated in the definition of health by this global authority.

Diagnosis in Ayurveda is through the means of the five important diagnostic elements collectively termed as “the nidaanapanchaka” comprising of the five components viz.,
1. Nidana ( the cause )
2. Poorvaroopa ( the prodromal symptoms )
3. Roopa ( signs and symptoms )
4. Upashaya / Anupashaya ( aggravating/ relieving factors )
5. Samprapti ( the pathogenesis )

There are other important diagnostic tools that assist in rugvinishchaya, which include the assessment of the physical and mental constitution of the patient. The vitiated elements, the strength of the person, his appetite, habitat, stamina, mind, the essence of the seven dhatus ( factors supporting the soma ), the diet- lifestyle –habits one is accustomed to, etc…. According to Ayurveda, time (or the season) also plays a crucial role in disease formation.

Ayurveda believes that all diseases are psychosomatic, which is now accepted globally in all form of medical sciences. Hence Ayurveda aims at treating not only the body but the psyche too. Therefore, it can be rightfully said that Ayurveda treats not the ailment alone, but the patient as a whole.

These Tridoshas have a deeper meaning; It is to be understood by an ayurvedic enthusiast. Ayurveda believes that –
• Health is a state of Tridoshic equilibrium, and disease is a state of doshic imbalance.
• All diseases emanate from the doshic vitiation by the Nidana (causes).

The line of treatment in Ayurveda aims at restoring the vitiated doshas to a state of equilibrium.

LIFESTYLE DISEASES AND AYURVEDA
According to Ayurveda, the majority of diseases/disorders are the result of improper diet and lifestyle patterns. Even in today’s world of medicine, a set of such diseases emanating from unhealthy diet and lifestyle are coined as “Lifestyle Diseases” which include a wide range of diseases like diabetes, obesity, spondylosis, PCOD, different forms of arthritis, etc.,

Ayurveda has been successful in treating such lifestyle diseases in an effective manner by adopting a wide range of treatment protocols and is hence gaining popularity worldwide.

STRESS MANAGEMENT AND AYURVEDA
All diseases are psychosomatic and stress is an important psychological cause in the development of diseases. In this regard, different ayurvedic treatment methodologies help in alleviating the stress levels and the subsequent hastening of the disease recovery process. One such treatment module called “Shirodhara” is being implemented globally in stress management.

Karkataka chikitsa merely known as Monsoon treatments, have supreme importance as the monsoon, affects each of the doshas in the body in a different way. It’s immensely said that rain falling into the hot summer earth increases acidity in all food materials and... 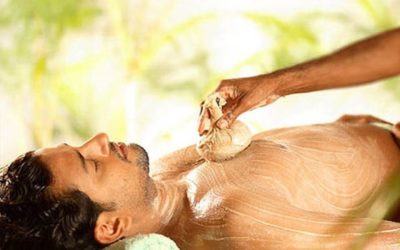 Wellness, as a luxury pursuit is found obviously in the more affluent societies because it involves managing the body state after the basic need of food, shelter and basic medical care have already been met. Many of the of the practices applied in the pursuit of...